What is the difference between:

“Let’s flesh out the details of the plan”

“Let’s flush out the details of this plan”

These phrases are so often interchanged, and it bugs me!  So let’s figure this out.

Generally, you “flesh out” details, not “flush” them out.  Fleshing out is a phrase which comes from the art world, where you start with a skeletal body, and then “flesh out” the rest of the image – adding “flesh” to a skeleton.  Get it?

Flushing out means to bring out into the open; police may “flush out” a criminal from his hiding place behind the toilet.  I’m not sure what it would mean to “flush out the details of the plan” – somehow the details are in hiding, waiting to be revealed, and you’re going to scare them into the public?

Here are some bloggers that I hope will read this!
– Travis Killion
– The Simple Millionaire
– Aaron @ PrimeAdvertising
– Zoe

Sorry for being a word snob.

I think spending money on Africa is a waste of money.  I’m not unaware of the human suffering.  I’m not racist.  You may think I am cruel.

AIDS is a like a famine.  It’s Mother Nature’s way of adapting to too large of a population of one species.  Africa is just an example of what we already know:  Either we learn to control ourselves- have fewer children and take better care of the planet, or Mother Nature will do it for us.  If we don’t, what is happening to Africa will happen to every other country in the future.  It may seem cruel to limit population growth here in the US.  It may seem cruel not to “help” Africa.  But trying to stop forces of overpopulation is no different than trying to stop a  tornado.  You can’t.

Unfortunately, the United States will eventually be like Africa.  Mother Nature will destroy our children if we don’t limit them.

I really enjoyed this presentation.

I especially like the part about the population of China and India: “Translation: They have more honors kids than we have kids.”

In 1950, Social Security was funded with a 3% payroll tax.  There were 16 workers for every 1 beneficiary.

To help out, I hereby promise to never file to collect Social Security benefits.

This is a follow up to my article yesterday about Ecotainers.  This morning I received a call from a woman that works in the Scottsdale, Arizona office for International Paper about their Eco Cups and my complaint.

She was very apologetic, and genuinely wants to fix the problem.  She gave me a fed-ex number so that I can physically mail her the cup so that they can analyze it.  Wow!  She went on to say that it’s a new technology, and they apologize if their manufacturing processes aren’t 100% perfect; but they definitely want to fix it.  She even asked if I had sustained any damages from my leaky cup, but I just chuckled and said it was ok.

So, I take back all my cynicism about their boardroom discussions and being cheap.  It’s not cheap to find a customer like me, call them, get the cup, analyze it, and try to apply the lessons learned.  Kudos for Ecotainer!

What if Microsoft had conceded in 1997?

Today, Microsoft conceded on a number of points in their European anti-trust case.  This is a huge turn for Microsoft, as it has battled this lawsuit since 2004.  Stepping back in time, we all remember the 1997 US anti-trust case which led the way to a June 2000 order that Microsoft be broken up.  That ruling was overturned in 2001, of course.  But clearly, the last 10 years have been tough on Microsoft.

Microsoft is no longer the same company as in 1997.  It clearly learned something.

In 2007, Microsoft was again accused of using monopolistic power – this time to push its Windows Live Search against that of rival Google.  Google didn’t make much progress with this in the courts this time.  Instead, Microsoft agreed to change Vista after the Google Complaint, and the judge was satisfied.

What happened here was simple.  In 1997, Microsoft fought the allegations, and arrogantly denied any wrongdoing, when it was clearly not that simple.  Because they refused to help fix the problem, the courts had no choice but to take action.  Microsoft lost big.

Contrast this to 2007, where Microsoft realizes that there is no way to win by fighting.  Instead, Microsoft pacifies the courts by agreeing to change and work with the system.  This way, Microsoft decided how to change their products – and that is much easier than letting the courts decide.  The approach worked fantastically.  Judges naturally want disputes settled out of court and they look favorably on the party that is willing to compromise.  Since the court really isn’t able to discern the subtleties of operating search APIs anyway, this is all too easy for the courts to agree to.

What if Microsoft had said, “Yes Judge Jackson, we’ll make IE removable” back in 1997?  Microsoft would have won the browser market anyway.  I doubt the Judge would have recommended a breakup.

The lesson to learn here is to know when to fight.  Hubris will never be looked upon favorably.  To any company that is ever in an anti-trust lawsuit in the future – learn from Microsoft.  The only winning tactic is to compromise immediately, work with the courts and do everything you can to demonstrate good-faith resolution of the problem. 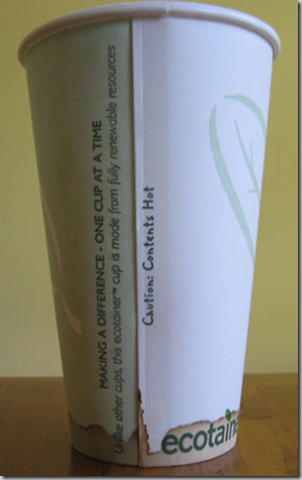 At work I drink a lot of coffee.  All too often, the coffee leaks over my hand within about 5 minutes of having poured it.  Here is a picture of the cups we use at work, they are “ecotainers”.  This one leaked in 5 minutes, drip-drip-drip onto the floor and my hand.

I think the whole ‘green’ movement started with companies that were in financial trouble.  Imagine this boardroom conversation at Ecotainer Headquarters:

“Frank, we have two problems.  First, people keep reusing the same cup.  We met some teachers in Indiana that used the same cup for over a month!  And, the Chinese are making cheaper cups than we can!”

“Bob, I think we need a less durable cup.”

“What if we remove the wax seal?”

“Hmm, the wax seal is about half of our manufacturing costs, so that sounds pretty good.   But it will probably leak leak.”

“No, they’ll just have to drink their coffee faster.  It will hold long enough for one cup of coffee.  It would be recyclable too.  Now we could label it environmentally friendly!”

“Environmentally friendly products usually get a 10-20% price premium too.”

“I can’t wait to get this to market!  Maybe we should open up a carpet cleaning side business?”

Update:
I’m not alone.
The Practical Environmentalist got so excited about the word “environment”, that he forgot to test the product he wrote about.  But 2 out of his 3 commentors agree – the cups leak!

I think I’ll go make cars with no engines.  Since they don’t have engines, I’ll be able to label them as environmentally friendly.  “Practical Environmentalists” everywhere will buy them up for their zero emissions; forgetting to read about the zero performance!

I wonder if this post is as silly as Ben’s whining about potato chips.

The Most Elegant Code

After years of debate about what makes readable code, its becoming clear to most developers that most of the time, the best code is also the shortest code.  I’m not saying you should pretend it’s fortran and use variables like “i”, “k”, etc.  Likewise, I’m definitely not arguing that you should strip comments!  But, for any logical statement, if it can be reduced, it can be made better.

When you are trying to write something that has few loopholes or bugs, writing it more succinctly is often the way to do it.  Further, by writing in the shortest form, code becomes similar, even if it didn’t come from the same author.  Verbose code, on the other hand, has more opportunities for mistakes and more opportunities for logic flow that doesn’t do what you think it does.

Now that I’ve deceived you into thinking this is a post about software, I’ll tell you what it’s really about:  lawyers.  Software developers have only really existed for 30-40 years.  Yet, in those few years, we’ve managed to figure this out – fewer lines of text is simpler.  Lawyers, on the other hand, have existed for thousands of years and still haven’t figured out that the simplest, most truthful, and least buggy way to describe something is with fewer words.  Perhaps lawyers seek not the truth.

Why do we have EULAs (End User License Agreements)?  They are complete noise, and a nuisance to all.  If you do feel your software needs a EULA, does it matter if it is displayed in the installer?  Why not just put a readme in the box?

End users don’t read them.  Even if they do, nobody knows what it means.  What purpose do they really serve?

Turns out they don’t protect the software maker: Network Associates.

They certainly don’t help the end-user: scam, spyware excuse, deceptive, nobody reads them.

I’m not the first to observe this:  Jamie Plucinski

The Internet Cuts The Middleman Again

Lots of people are writing about how major artists (Madonna, nine inch nails, radiohead, etc) are ditching their recording labels.  They are instead opting to take their business to consumers on their own.  This is so great, because everyone wins.  Consumers get music for less and the musicians make more money.  It’s awesome!

– Software Companies.  2 guys in a garage with no marketing, no sales, and no funding can build a product. (Lookout & lots of others)

– Authors. An amateur with a  blog can garner the readership of millions without help from anyone. (TechCrunch, John Chow)

– Music.  Musicians can sell their songs directly to the public.

In this world, there are two types of people.  Those that build product (software products, physical goods, art, content, etc), and there are those that don’t build product (marketers, sales people, etc).  The latter is becoming increasingly marginalized.  Don’t get me wrong – there is definitely a need for salespeople and marketers.   But thanks to the Internet, there is a decreasing need for them.  I think this is great, because it makes us more productive as a society – everyone needs to learn to build something.  It’s also a clear indicator that the Internet must always be free.