From the Chromium Blog: 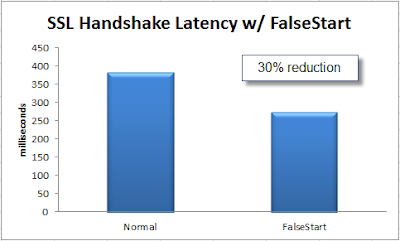 Our biggest concern with implementing SSL False Start was backward compatibility. Although nothing in the SSL specification (also known as TLS) explicitly prohibits FalseStart, there was no easy way to know whether it would work with all sites. Speed is great, but if it breaks user experience for even a small fraction of users, the optimization is non-deployable.

To answer this question, we compiled a list of all known https websites from the Google index, and tested SSL FalseStart with all of them. The result of that test was encouraging: 94.6% succeeded, 5% timed out, and 0.4% failed. The sites that timed out were verified to be sites that are no longer running, so we could ignore them.

To investigate the failing sites, we implemented a more robust check to understand how the failures occurred. We disregarded those sites that failed due to certificate failures or problems unrelated to FalseStart. Finally, we discovered that the sites which didnâ€™t support FalseStart were using only a handful of SSL vendors. We reported the problem to the vendors, and most have fixed it already, while the others have fixes in progress. The result is that today, we have a manageable, small list of domains where SSL FalseStart doesnâ€™t work, and weâ€™ve added them to a list within Chrome where we simply wonâ€™t use FalseStart. This list is public and posted in the chromium source code. We are actively working to shrink the list and ultimately remove it.

All of this represents a tremendous amount of work with a material gain for Chrome SSL users. We hope that the data will be confirmed by other browser vendors and adopted more widely.

1Measured as the time between the initial TCP SYN packet and the end of the TLS handshake.