Obviously, everyone likes the tax cuts.  But who pays with this BNRT (Business Net Receipts Tax)?  Everyone pays it.

The problem is that if you look at state revenues, we keep increasing income taxes (now the highest in the nation) and sales tax (also the highest in the nation).  But these taxes donâ€™t cover all consumption.  And as consumption trends change over time, the revenues from these streams change.  The commission notes correctly that this is why the government has such feast-or-famine income streams each year. 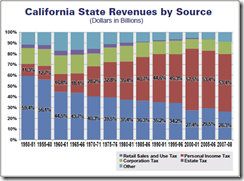 First, we can look at state revenues.  You can see the rapid growth of the income tax.  You can also see that sales taxes, as a percentage of revenue are dropping.

Next, just what percentage of sales are subject to taxes?  Over time, you can see most business in California is not subject to the tax.  This creates a disproportionately high tax on some industries while there is no tax on others.  And, you can see that spending patterns among Californians change over time.  This is why the current tax system hasnâ€™t been able to keep up with the times.

The critics are upset because the new tax side-steps their current favorite tax-breaks.  Any massive tax change is going to make someone unhappy.  But is the new tax proposal broad and fair?  Absolutely. Nonetheless, critics still cite that the new system gives breaks to the rich.  But that isnâ€™t true.  Who consumes the most in California?  The rich.  The rich will far-and-away pay the most under this system, just as they do today.

I do have a couple of criticisms.  First, I donâ€™t understand the elimination of the corporate tax.  The corporate tax today discourages businesses from choosing California â€“ so eliminating the tax is commendable.  But, I donâ€™t think it needs to be completely eliminated â€“ reducing to 1 or 2% would pacify critics and still leave California competitive.  Second, the exact rate of the tax is a little dodgy.  Iâ€™m worried that both the tax rate and the ability to collect are still too unknown.

By the way, lawyers hate the proposal.  Why?  Because the services they sell, which are currently untaxed, would now be taxed.  Donâ€™t be surprised if a lawyer says he hates it.