Waiting For A Better Browser

When browser upgrades arrive, they usually contain good improvements in terms of speed, security, reliability, and features.  For website developers, new browsers usually offer better capabilities for building websites.  Unfortunately, there is a lag-time between when browsers are released with new features and when users upgrade sufficiently that developers can use them.

Upgrades are also important from a security perspective.  When users run older browsers they are exposed to security risks which have been previously discovered and potentially fixed.  In the case of Internet Explorer, this problem got so bad, that various governments, and even Microsoft advised against usersâ€™ continued use of Microsoft Internet Explorer 6.

So how long does it take users to shift to a new browser?

The data from StatsCounter shows this very clearly.  Chrome upgraded virtually all of its users from version 4.0 within a month, starting in Feb 2010.  Firefox also upgraded version 3.6 at about that time.  The upgrade is progressing quickly, and now, 3 months later, approximately two-thirds of Firefox users have upgraded.   Internet Explorer 8, by contrast, was released over a year ago, and so far less than half of IE users have upgraded. 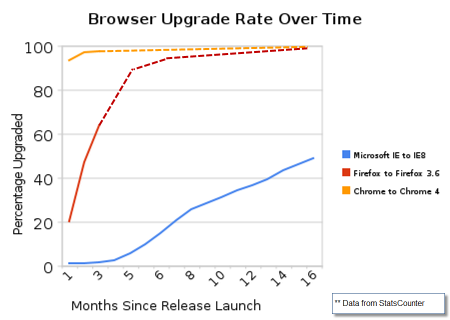 2 thoughts on “Waiting For A Better Browser”