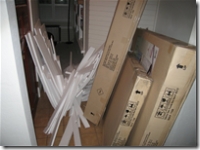 Despite my frequent criticism of technology patents (and here, or here), I am also officially part of the problem.  Last week, I was issued a new patent –number 7243163.

This patent was filed March 29, 2002, while I still worked at Good Technology.  Since that time, Good was acquired by Motorola.  I assume that Motorola now owns the patent; but I don’t really know.  All I know is that while it could be used to do evil work for others, it will no longer do anything to benefit me.  It might have increased the purchase price that Motorola paid for Good, so perhaps everyone at Good owes me a nickel.

Aside: Here is an idea for a website – sort of like the USPTO website of patents, but instead keep track of who-sued-who and who-was-awarded-what for patent infringement cases.  It would be neat to go back and find out who won from this patent just by looking up the number.

Anyway, there is one thing that makes me proud of this patent.  I am the co-author of that patent with John Friend, Roger Collins, and Mike Bennett.  These guys were all fantastic engineers, and I’m thrilled to have worked with them.  If you want to know more about what a “data processing apparatus” is, you’ll have to ask them, because I haven’t a clue.

Standards are Slow, Vista is Fast?

I love this TCP window scaling in Vista – I am so happy with Microsoft for having fixed up the network stack (after all, faster networks mean more Google searches, right? :-).  I have yet to watch the packets on vista to verify for myself, but I look forward to doing so! 🙂  <super geek>

So what is Microsoft’s reward for having made major improvements to the TCP stack?  Slower connections (and probably some irate customers), of course!  And it’s all because there is software and hardware out there that never implemented a Van Jacobson TCP feature spec’ed back in 1992.  This one isn’t Microsoft’s fault…

The only mistake on this one is the PM that called this “Auto Tuning”.  That sounds like the computer can actually think, right!  If it really could auto-tune, you’d think it would auto-tune out of this edge case, and the poor user wouldn’t have to manually reconfigure.  Maybe they should have stuck with the simple and elegant geek name “TCP Window Scaling” and avoided any confusion.

I’m never surprised by the stock market.  I was happy when the Google stock peaked at around $555/sh last week, but yesterday they dropped ~8% to ~$515.  Why?  Well, because Google announced record revenues and profits of course!

But actually, I think there is one thing which really reflects the market disappointment – too rapid growth.  According to the public quarterly report, we hired 1548 people, bringing total headcount to 13786.  That means that 11% of the company arrived last quarter, and that is on top of very high growth rates in the prior quarters as well.

If growing at that rate quarter-over-quarter doesn’t raise your eyebrows, then I’m not sure what will.  On the good news front, Eric and others on the conference call seemed to indicate they were looking at this.  I guess we’ll see what happens next.

For investors (anyone?) it’s just hard to believe that a company can absorb that volume of people without also taking on significant risk to their culture, technology, quality, profitability, and ability to innovate.  Risk is uncertainty, and uncertainty warrants a lower stock price.  It’s just that simple.  On the other hand, to not grow rapidly would mean to take on another, less visible type of risk – that competitors in the field just bulldoze you with massively more features, products, and sales.

All that said, please continue to invest in Google because there’s a whole bunch more of us now working together to make sure that Google’s best days are ahead, and not just part of the past.

The Difference Between Google and Microsoft

I had a friend visit for lunch here at the Google campus last week who is a long-time Microsoft employee based in Redmond.  He had never been to Google before, and was interested to see.  As we waited in line in the cafe, he said, “You know, I’ve never heard music in the Microsoft cafeteria before”.  I think he liked it.

So there you have it – the difference between Google and Microsoft is music in the cafe.

I had the unexpected pleasure to install carpet from both Home Depot and Empire Carpet in the same week.  Here is a summary of the experience.

Home Depot’s carpet installed first.  The measurements were done electronically, sent to a measuring company and a computer laid out the carpet to leave the fewest remnants.  Home Depot often runs “$99 installation” specials, so the installation cost was fairly small.  The carpet cost ~$4.22/sqft, and I upgraded the pad to the 8lb pad for a few cents per sqft.  Overall cost was about $4.80/sqft with the upgraded pad and installed.  The carpet we installed was a plush carpet.  It was slightly more expensive than average, but we wanted it to be soft.  The result is gorgeous – a very soft, thick carpet that looks great.  It’s an off-white color, and looks beautiful.

We had to wait 3 weeks for the carpet to arrive, as Home Depot ships it from Georgia.  The installers were great, and did a very nice job.

Empire’s sales model is to come to your house and use a full-service salesman.  They are very nice, pleasant, and don’t pressure you much.  The salesman measures manually on a piece of scratch paper, and somehow those measurements get back to the installers.  Despite the lack of technology, they got the right amount of carpet.

After measuring, they do try to gouge you on the price, so you have to be careful and it is a requirement to negotiate.  Taking the list price would be silly.  In our case, we were trying to pick the closest match carpet to the Home Depot carpet listed above.  We found the one which was closest in terms of texture, softness, and color.  We knew it was a slightly different color, but it was hard to tell from the small samples how close the texture would be once installed.  Initially, he offered a price of $3870 for the carpet.  I suggested $2000, and we settled at $2600.  This worked out to a price of $4.44/sqft.  I don’t know if I negotiated well or not – I wasn’t trying very hard.  He said all the usual salesman things, but you just have to be persistent.  I’m pretty sure that I could have had the carpet for $2000.

Empire can install the next day because they use local warehouses.  In our case, they installed 2 days later.  The installation was very good, although I didn’t think that their edge cutting was as good as the Home Depot installer (there was about 1/8″ gap which I didn’t think should be there on one wall).

In terms of quality, Empire’s carpet is not as good as the Home Depot carpet we picked out.  It is noticeably thinner, doesn’t feel as good or as soft, and doesn’t look quite as nice.  Don’t get me wrong, it looks good, just not quite as good when side-by-side to the Home Depot Carpet.

Home Depot is easier, cheaper, and has slightly better quality carpet.   But with Home Depot they take longer to get the carpet installed.   In our case, Home Depot also made a big mistake with the carpet which is why we had to have Empire finish the job.  If I had more time and could do it again, I would probably go with Home Depot.

TV Made Me Rich!

Being that I don’t watch TV, don’t have cable, and can’t remember the last time I watched a movie, I liked reading this article.  Only trouble is, I can’t figure out where those millions of dollars I supposedly saved went either.